At today’s meeting of the Hunter College chapter of the PSC, attendees passed the $7K or Strike resolution that passed at the Graduate Center last spring and Bronx Community  College last week. After significant debate, the vote was twenty-eight for, one against, and one abstaining.

It is worth noting that many adjuncts cannot attend chapter meetings because low wages and punishing conditions demand that they shuttle back and forth between the several jobs they must hold to stay afloat. Recognizing this fact, colleagues from Hunter’s Film & Media department circulated a petition through which members unable to attend could signal their support for the resolution. In just two days, eighty members of the department, including a few full-timers, signed the petition.

Also significant is that the number of undergraduate students in attendance doubled from the last meeting. The support of students is a prerequisite for any successful mass action by teachers. Our working conditions are students’ learning conditions, but just saying it is not enough—we need to mount a fierce campaign to actively enlist students on our side by making their teachers’ plight visible and asking them to participate actively in the life of the union. We should also make students’ concerns—tuition, class sizes, building conditions, advising, and more—part of our bargaining agenda in service of building a democratic bloc that can redirect the university away from the cruel logic of profit-seeking and in the direction of our ideals. This is not how it is done, the savvy will tell you. Pay them no mind. Formal structures have failed us—a democratic revolution is our only hope. 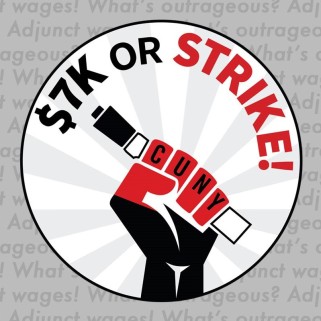