Professional Staff Congress leadership, feeling the heat in the midst of a sustained outbreak of critical thinking on the latest status-quo contract they are trying to slide by the membership, have sent out one of their most reliable adjunct allies, College of Staten Island instructor Michael Batson, who has taken to the pages of Alternet (several weeks after we did) to urge adjuncts to rein in their anger and their strategic imagination and admit, as the leadership does and as CUNY management desperately needs us to do, that There Is No Alternative to the present status quo, whereby the college teaching workforce is composed of a shrinking tier of relatively privileged full-time faculty protected from the worst ravages of the anti-teacher, anti-student agenda of right-wing politicians like New York Governor Andrew Cuomo while they are gradually replaced by a new kind of teacher—the permanently poor, permanently cowed, permanently disposable worker known as the adjunct.

Brave rhetoric aside, the de facto role of the PSC in this scenario has so far been to co-manage the decline of the old academic labor system and the rise of the new one in the cleanest way possible, offering staunch verbal resistance while carefully declining to disrupt either managerial prerogative in meting out the slow, invisible violence that characterizes the working life of so many adjuncts or the remaining privileges of the rump of the old system—the full-time, tenure-track faculty whose numbers and representation in the actual teaching force have declined by the thousands since the 1970s but who, through inertia and the leadership’s inexplicable obedience to management’s strategy for creating a thoroughly contingent, virtually un-organizable workforce, maintain control of the decision-making bodies of the union and use those bodies to pursue a narrow, self-interested strategy they leaven from time to time with a bone or two thrown to the majority. In urging us to vote “yes,” Batson’s message to adjuncts is that we need to stay in line and be grateful for those bones because he and his allies plan to use them as the framework for some as-yet-unidentified future strategy. 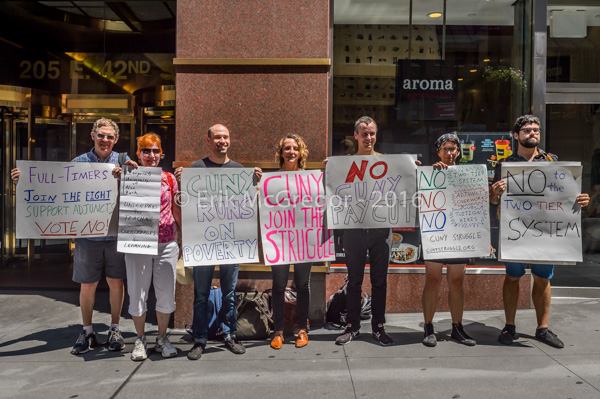 Batson’s article is thoroughly dismaying, consisting of that odd blend of passive voice, generic description, unexamined assumptions, slippery argumentation, vague promises, and, predictably, the clumsy, carrot-and-stick style discipline that adjuncts have come to identify with the present PSC leadership. We learn that the contract contains “important gains” as well as “steps” that are variously “important,” “critical,” “incremental,” and “real.” What should we do, says Batson? Engage in an “organizing effort,” “build meaningful relationships with our labor and community allies,” develop “consensus” and set “goals.” If this all sounds so vague that no one could possibly disagree with it—well, that’s the point. Is there anyone in the union who doesn’t believe we should be “organizing” or that it is helpful to have “goals?”

Batson sticks to the generic because the specifics are damning—pay cuts for all and another de facto endorsement by our own union of the fundamental tenets of the two-tier system. Every provision of the contract is tiered—the raises, the retroactive pay, the signing bonus, the purported workload reduction—you name it. The contract ratifies, endorses, and widens the gap in institutional power and material well-being between adjuncts like Batson and his full-time allies in the leadership. Ironically enough, one of the few improvements pursued for adjuncts—a pilot program to test three-year appointments that Rita Tobin estimates will reach at most one in ten adjuncts in its first year—presumes in advance, with its two-courses for ten-semesters requirement for eligibility, that adjuncts will already have achieved the job security it is meant to establish!

Batson, like most of his colleagues in the PSC leadership, is able to correctly diagnose the problem, asserting that “growing exploitation of adjuncts is the defining academic labor issue of the last 40 years,” but his solution—that we will combat this trend by repeatedly signing off on contracts that exacerbate the exploitation of part-time faculty because hey, what else can we really do?—is counter-intuitive, to say the least. When we posted his article to the CUNY Struggle mailing list, the response was dismay. “It is disheartening,” wrote one long-time adjunct, “that one of the few adjuncts on the bargaining team should be working to undermine our initiative for equity.”

Batson is right that organizing for the next contract begins today, but we need to have a serious strategic discussion about how we are to proceed going forward if we want to be remembered as anything more than the orderly gravediggers of academic labor at CUNY. To make any kind of a dent in the status quo, we are going to have to break some rules. Instead of accepting as given management’s initiative to first create and now strengthen a two-tiered system, we need to begin challenging the very category of “part-time,” “adjunct” work—words which have no meaning for the thousands of dedicated teachers whose work with students at CUNY is a full-time commitment. We need to coordinate with our brothers and sisters in other unions beyond the short-term, top-down alliances of convenience to which our leaderships wish to limit us for fear of upsetting the apple cart of contemporary business unionism, whereby any contact between memberships not carefully monitored by leadership raises the specter of raiding. And we need to begin to think about how to restructure our organization to take into account the realities of a new academic labor market that is already here—if, that is, we want to be anything more than a “life raft” for a privileged class of skilled laborers, like the AFL during the 1920s, whose unions “stood by as American industry raced ahead.”1 New ideas rooted in new realities, new techniques, and a class-wide perspective can produce major breakthroughs. Like one auto executive said of the sit-down strikes of the 1930s, “When suddenly the rules of the game, which the unions had always lost, were altered by the sit-downs, there was an outcry.”2 We have to figure out what our version of the sit-down, for our place and time, will be.

When we picketed CUNY last week , we had a message for both the school and our own union. To the school we must say that we are not going to take it anymore and that the days are over when they will be able to use the union leadership as a delivery service for the austerity that threatens ourselves, our students, all working people in New York City and the way of life that we as teachers have chosen—one dedicated to helping our students develop themselves to change the world in their own interests, regardless of what Governor Cuomo and his allies in big business have decided is good enough for them.

To the union, we say that it is time to start fighting back. It is time to wake up and realize that our so-called friends in the Democratic Party have no real interest in helping us, that working people never have and never will prevail in a political system that is rigged against them, and that they need to embrace a strategy of independent, democratic mass mobilization—in other words, power in the streets—which is the only thing that our supposed friends in government will ever truly listen to.

Doing this means shaking up the status quo. It means building alliances with students and with workers across the city, and it means challenging the execrable Taylor Law, a robbery-by-statute of the only real power working people have ever had—the power to withhold our labor. Without our labor there is no CUNY. Because—and this cannot be said loud enough—WE are CUNY. We—the workers and the students—are CUNY, not the administrators collecting fat salaries and not the get-rich do-nothings who prowl the halls of the state government. We need our union to recognize this fundamental truth and help us fight back. The leadership is right that organizing for the next contract begins today, but the question is whether we will organize for more of the same or organize to win.

One thought on “We Need to Break Some Rules”