As a member of the Graduate Center PSC executive committee, and a GC delegate, I voted “no” on the contract at the meeting of the delegate assembly (DA), and will vote no again this round. I want to explain why, and how I think this relates to graduate employee, adjunct, and larger union struggles. 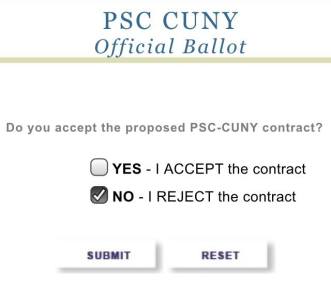 Examining the details of this proposed contract, it is apparent that most of the gains are highly contingent, while the losses are more permanent and set in stone. For instance, workload reduction for full-time staff relies on management’s goodwill in forming committees to “find resources” to accomplish this. HEO advancement for taking on added responsibilities or workload is not automatic, but is something that must be applied for, and is subject to the “fiscal and programmatic needs of the department and/or the college.” The much-touted job security gains of 2 or 3 year contracts for adjuncts will apply to a tiny percentage of adjuncts, and is ultimately merely a 5-year pilot program to which the PSC must agree to any modifications CUNY wants at the end of the 5-year period, or the program disappears. At the delegate assembly, several adjuncts explained that shuttling from campus to campus makes it difficult to accrue the needed hours and semesters in a single department to qualify for consideration for the appointment. One adjunct of 20 years pointed out that he would not qualify under this contract’s stringent rules.

The losses in this proposed contract include a widening of the pay gap between full-timers and contingent, adjunct instructors. This two-tier setup is at the heart of ongoing attacks on public higher education and higher ed unions. CUNY runs the majority of its classes by using super-exploited adjuncts, while at the same time continuing to chip away at tenure-track positions. We need a real fight to expand tenure-track lines and positions. Instead, this contract offers gains to management around the expansion of non-tenured 1-year appointments to 250, raises in the maximum pay for elite faculty, and expansion of non-capped elite faculty salaries. Instead of the expansion of a third “elite tier” of faculty, this elite pay should have instead gone toward pay parity among CUNY workers, which was a stated goal of our contract struggle.

We’ve heard from our union negotiators that CUNY would absolutely not budge on allowing us to distribute relatively more money to adjuncts (in order to achieve our stated aim of moving toward pay parity, or at least to not widen the pay gap). Instead of continuing a real fight for pay parity to put a dent in the two-tiered system, we got a highly provisional meager gain on adjunct “job security.” This fits with a national pattern of unions being able to achieve small gains in security for the lower tier of their workforces, at the continued price of retaining or expanding the tiered systems themselves. This sets us back by reinforcing the divide at the center of our university, our union, and our struggle. Thus, despite the provisional gains made here and there, this contract further divides and weakens us by making no movement on the big question of parity. CUNY and NY State are absolutely dedicated to maintaining and exacerbating this unequal labor structure, and it will take a real fight to challenge it. The fates of full-timers and adjuncts are tied together and depend on doing so.

Many delegates at the DA who ended up voting “yes” spent large portions of their speaking time raising critiques of the contract, and saying that we’ve got to do better in the next contract fight, and that we need to build on the mobilizations of this past year. We unquestionably need to continue to build on recent mobilizations, which were delayed in this contract struggle for far too many years, while we awaited a more “friendly” mayor. However, there are compelling reasons to continue to fight in the “here and now” around the current contract, as opposed to a hypothetical future struggle around the next contract, which is by no means guaranteed to begin in the Fall of 2017, when this contract would expire. If we really connected PSC struggles with our students’ fight against increased tuition, against CUNY crackdowns on activism, and other issues that affect the wider CUNY community, we could build strong public support in NYC. We were already receiving very favorable media coverage around the time of our 92% strike authorization vote, we had the inspiring example of Verizon workers fighting back, and the Bernie Sanders phenomenon pointed to the ongoing crisis of the U.S. political system. It did not feel like the time to pull the plug, and settle for the current contract. I feel that we deserve better, and could have more if our union carried forward a real plan to build for potential job actions, instead of transparently using the strike authorization vote as a symbolic bargaining chip.

As to the basic question of negotiating strategy, it is clear that CUNY effectively lowballed us by offering nothing for a long time, then 6% over 6 years, and finally the current offer of 10.4% over 7 years. This is the city bargaining “pattern,” and is what DC 37 got without a strike authorization vote. Rather than aiming high ourselves and carrying on a struggle on that basis, however, we lowered our initial 19% demand (which also doesn’t keep up with NYC living cost inflation over the same period) without explanation or input from the membership. Demands raised by adjuncts in 2010 around the contract struggle for automatic 3-year contracts for adjuncts were replaced with the demand for contracts that would kick in only after an adjunct has taught two courses per semester for five years, a condition that department chairs can easily evade by simply laying off adjuncts before they reach the necessary five years. In addition, the adjunct demand for a $30 per credit hour raise (an approximately 50 percent raise for adjuncts) was replaced with the vague demand for “measurable progress toward pay parity” (which has not been achieved). This systematic lowering of demands before the contract struggle even begins hamstrings us and demobilizes rank-and-file support for a real fight. Bargaining logic dictates that we should instead always ask for more than we think we can win. If you start small, meeting halfway is never actually halfway – it’s a loss.

A substantial “no” vote will send a message to CUNY and our union that this contract is not good enough, that we have to do better, and that we need to rethink our strategy. If the no vote were to win, this does not imply an immediate strike or job action by the PSC, and could play out in various ways. One possibility is a return to bargaining with a member mandate to negotiate a better contract. Contrary to leadership’s claims, I see no indication that voting no would get anything worse. The deal we have follows the city pattern, and we likely would have gotten something pretty similar with no mobilization at all, as DC 37 did. Were we to vote it down, we wouldn’t necessarily do better, but based on past examples of no votes, it’s hard to imagine we would do worse. However, the real possibility held by a no vote for achieving a better deal would be that our union seriously readjusts its strategy and begins the process of mobilizing in earnest to prepare for a strike or job action. This preparation will realistically take longer than the Fall, and must involve an escalating series of actions that can draw in wider layers of membership, especially adjuncts, into such a struggle.

This approach does not minimize the dangers of who we’re up against, as well as the Taylor Law, but rather uses democratic input and activity from the rank-and-file to formulate broad demands which can mobilize a determined and inspired struggle. As PSC leadership pointed out at the DA, we will need to strike for “more than 1 or 2 percentage points” in pay to be able to mobilize members to take on CUNY, the governor, and the plan to run our public universities on exploited contingent labor. It is true that to motivate and mobilize people for an effective strike, you need to have clear demands that inspire people and inspire the public. However, these broader demands such as substantial movement toward parity or free CUNY tuition were never a part of our contract struggle to begin with. This is why the argument about our membership not being willing to strike rings hollow. The flip side of this is that the membership could be organized for job actions if we raise our sights, raise our expectations, and raise demands that resonate with PSC members and the broader public.

If we think our union’s strategy could be better, we should not accept the bitter fruits of that mistaken strategy that have resulted in the current contract offer. It only appears like the best we can do because our strategy has been faulty from the beginning. Our union won steps toward pay parity in the early 2000s (adjuncts winning a weekly office hour), and other faculty unions at public institutions such as the California Faculty Association (CFA) have virtually achieved pay parity. This tells us that such victories are possible, and we should learn from these struggles and apply what we can to our own situation.

The Adjunct Project and many other activists have played a key role in promoting adjunct struggles, and winning the possibility for graduate assistants to join the GC chapter. Subsequently, our GC chapter has been revived as a fighting vehicle and organizing force within the PSC. All of our chapter and union’s organizing of the past year, including the strike authorization vote, has helped to strengthen us going forward. I do not believe we need to split adjuncts off into a separate chapter or union, as some have suggested, but rather we need to organize within the union to direct our struggle at management and forces that stand behind them. It is my hope that people on both sides of this contract question can continue a healthy debate and discussion moving forward together in strengthening our GC chapter, transforming our union, and taking on CUNY, Cuomo, and a larger system that shortchanges public education, students and faculty alike.

One thought on “Why I’m Voting NO on the Contract”