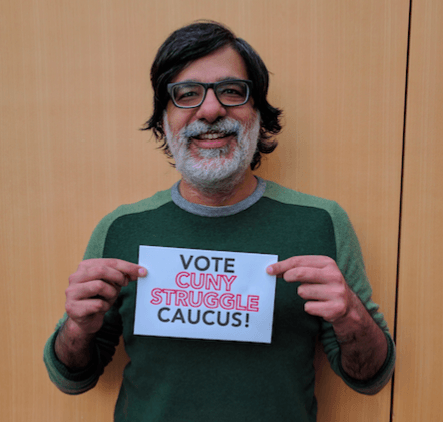 Sonam Singh is an Adjunct Lecturer in English at Barnard College and a member of the Bargaining Committee for Barnard Contingent Faculty-UAW Local 2110 (BCF-UAW), a union for part-time and full-time non-tenure-track faculty at Barnard College. BCF-UAW was certified in October 2015, commenced bargaining in February 2016, passed a strike authorization in December 2016, and settled its first contract in February 2017, a few days short of a February 21 strike deadline. Over the five years of the contract, per-course minimums will rise from $7,000 to $10,000 for part-time contingent faculty and annual salaries from $60,000 to $70,000 for full-time contingent faculty.

A really important part of it was making clear—to ourselves, to our members, and to the administration—that we didn’t think it was a lot of money. In every case, from our initial demands down to the amounts we settled on, contingent faculty will be paid less than tenure-track faculty for the same work. I think it’s crucial for contingent faculty to start negotiations at pay parity. The existing paradigm for adjunct pay has to be rejected from the outset.

“I think it’s crucial for contingent faculty to start negotiations at pay parity. The existing paradigm for adjunct pay has to be rejected from the outset.”

Beyond that, the success of our campaign, in the face of a hostile administration, was to pass an overwhelming strike authorization and mobilize actively for a strike. A strike authorization without a credible show of an ability to strike does not accomplish much. For example, the modest health care benefits we won for part-time faculty and the administration’s acquiescence to our wage demands happened only because of setting and mobilizing for a strike deadline. If the administration thought striking was unlikely or most members would cross the picket line, they would have been happy to drag out the process indefinitely. If all we had done was bargain, all the negotiating acumen and rhetorical savvy in the world would have made little difference.

2. How did BCF-UAW mobilize members?

Our contract campaign was only going to be as successful as the Bargaining Committee’s ability to credibly speak on behalf of the membership and the administration’s awareness that they weren’t bargaining with a group of pragmatic professional bargainers but with a unified group of their employees demanding fundamental fairness in working conditions. The biggest problem with classic closed door bargaining is that management knows the union bargainers—especially if they’re long-term bargaining professionals—are willing to settle faster and settle for less, especially if they haven’t put in the organizing work outside the bargaining room unifying membership around core demands. We updated membership regularly (typically after each session), solicited feedback, invited members to observe bargaining, and held informational meetings. The administration knew our demands in the bargaining room were continuous with our organizing outside it, that our members were unified behind us.

“The administration knew our demands in the bargaining room were continuous with our organizing outside it, that our members were unified behind us.”

The other piece that’s important to mention is student support. It was crucial to make sure that students understood our issues and heard about bargaining from us as often as from the administration. Barnard has some amazing student activists who were powerful allies and helped create pressure on the administration. Ultimately all colleges and universities are teaching institutions and unions have to work to win students to an understanding that teaching and learning conditions are intimately connected, that our issues are shared issues.

In many ways, yes. I think the main thing I’d emphasize is that Barnard is not Columbia; it is not a subsidiary or branch of Columbia. It is a completely separate institution with its own President, Board, and a quite small endowment. Barnard depends on tuition dollars and government grants for the majority of its budget. We were bargaining with a school with limited resources and large fixed commitments. But we grounded our campaign in the college’s core teaching mission and demanded fairer allocation of those limited resources.

It’s also important to note that there are many faculty who adjunct at both Barnard and CUNY, as there are many people who adjunct at some combination of Barnard, Columbia, CUNY, NYU, The New School, etc. Each of these institutions draws from the same labor pool and each of these institutions looks to the others to determine pay and benefits levels for contingent faculty. CUNY, as the lowest-paying employer for adjuncts, depresses the market for part-time faculty across the city. Personally, I was extremely discouraged by how the last PSC contract actually increased the gap between part-time and full-time faculty and how unwilling the PSC leadership was to own up to this basic fact.

4. What advice would you give to PSC rank and file members who want to democratize the union?

It’s an unfortunate fact of life that large unions can be anywhere from wary of to outright hostile towards genuine rank-and-file engagement. But without such engagement unions cannot thrive and be effective forces for change; the best they can do is fight to maintain an often inadequate status quo. We need unions that have visions and competencies far beyond the (albeit important) cards-certification-contract-grievances routine that bureaucratized unions manage. I don’t have advice to give, but as an academic, union member, and New Yorker, I support all PSC members who demand transparency, accountability, and robust democratic procedures in their union.